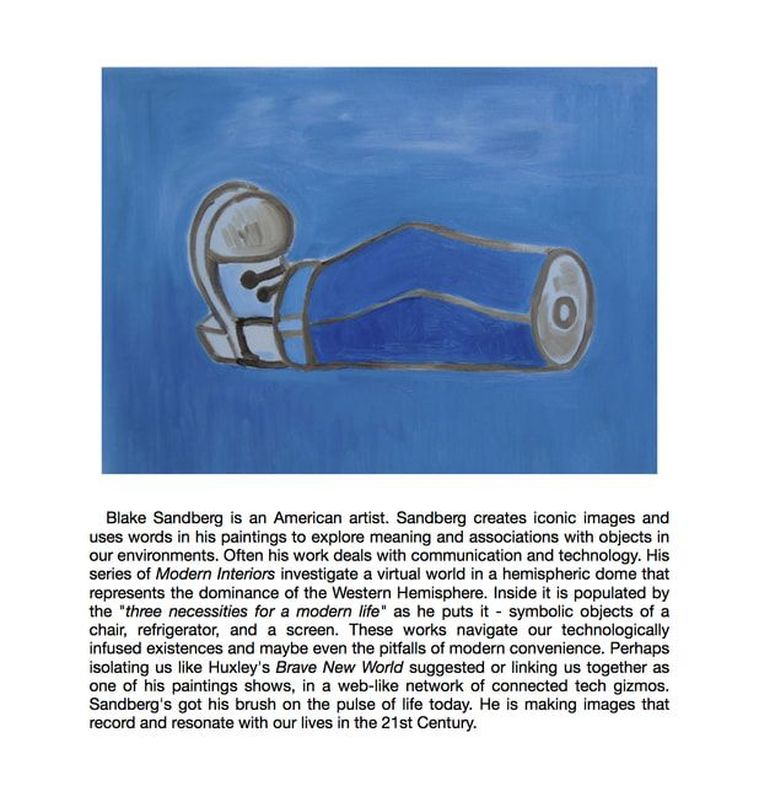 There’s an unforced urgency about these paintings by Blake Sandberg. At once blunt and delicate, they are born of a sensitized exposure to the rapidly evolving conditions of life in today’s world, a wired, connected space, and a planet so re-made by man that scientists say we have entered a new geological epoch: The Anthropocene.

Indeed Sandberg’s work prompted me to revisit earlier artists who took on tech. It happened that there was an artist present at the birth of the Industrial Revolution. Joseph Wright of Derby, the 18th century Brit, was friendly with the pioneer industrialists in the Lunar Society. Such of his canvases as An Experiment of a Bird in the Air Pump glow with a promise that the humdrum old order was being replaced by something rational and radiant.

The Age of the Enlightenment bloomed but for those actually living with it, it wasn’t that radiant - William Blake wrote of “dark Satanic Mills” – and other revolutions that followed had ugly collateral damage too. Vladimir Tatlin, who designed his famous Tower to celebrate the Russian Revolution, was early in understanding the new power of media. The Tatlin Tower was designed to channel news and propaganda by wireless, telegraph, and loudspeaker, there was to be a giant open-air screen and a device capable of projecting messages onto clouds. The design was finished by 1920. It was never built.  The following year saw the opening of a play by a Czech writer, Karel Capek, R.U.R. which stood for Rossum’s Universal Robots, introduced the word “robot” into most languages, and had a deliciously simple plot: Robots wipe out the human race.


So artists and writers were there from the beginnings, but looking at the changes ever more darkly.  Blake Sandberg makes paintings which treat with these charged issues in our present, our probable future. His images are imbued with our hapless tech dependency, they channel our love/loathing if the media and they using a pictorial vocabulary that Sandberg has fashioned, a set of pictograms, most of which can seem as effortlessly readable as icons – a TV screen, a rudimentary eye with aerials, a freezer, the grid like skeleton of a globe – but which are presented neither as obvious promises nor warnings. Add that the most frequently used of these pictograms – a severed left leg, trousered, wearing clumpy athletic shoes, with red flesh, compact as sausage meat, around white bone – is simply, inexplicably there.

Okay, a little backstory. Sandberg was born in Austin, Texas.  He studied art at the University of Texas, where one notable professor was post-pop painter Peter Saul.  Blake moved to New York in 1997. He began working in a studio in the East Village on Avenue B. We met soon after. Then somebody took me to a show of his in 2001 on the Bowery and I bought a postcard painting of - yes, a severed leg. We became friendly. He and a girlfriend of his were in a band, ALIENS, and I went to some gigs. We talked. I visited his studio and I became steadily more impressed by his work.


Unlike many artists today - Blake likes to work with a single image, distrusting compositions with collaged images as being too routinely “easy.” Forcing the viewer to focus on a single, isolated image is important to him. That said, some of his larger pieces do feature a scene of both a freezer and a screen, enwrapped by a red grid work that recalls the Geodesic domes of Buckminster Fuller. Sandberg considers this interior “Technosphere” space a “virtual environment,” also functioning like a stage for his ideas, the screen meantime is being watched by a severed leg. Yes, The Severed Leg. Which at this juncture deserves capitals. There are several Severed Leg canvases. These are “explained” with painted captions: Import of Feet, Nothing To Lose, Never Give Up, and Object. And there is, of course, no way of telling with the last whether “Object” is a noun or a verb.  Well, asking artists why they do what they do is not always a route to illumination but I did ask Sandberg why the severed leg? He said, it was all down to Edouard Manet. Manet, who Charles Baudelaire called “The Painter of Modern Life,” had his leg amputated shortly before he died at 51 in 1883. “The Painter of Modern Life" lost his left leg. Blake took this dis-connection as a metaphor and reconnected to Manet’s change of subject as inspiration to create his own imagery. “Manet had a kind of flipping the news stations approach to his images,” Sandberg said. “He wasn’t just painting the mother and child over and over. I think being focused on the moment - that’s the way artists should be. I feel that’s my duty, I guess. I’m just trying to figure out what’s going on now.” - AHG 2016 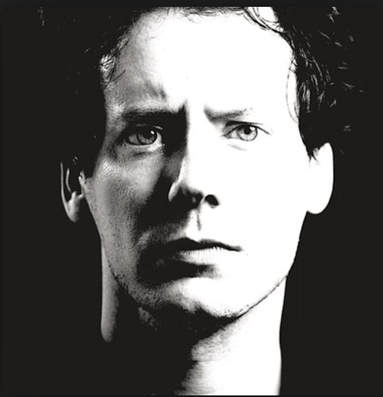